The GrowthPlay leadership team examined the sign of the times, and asked, what is it that we want to offer our community to elevate hope? That will create clarity and will drive some measure of control and confidence so that people can act courageously in this distress and post stress?  With our Leadership in Distress Series we hope we can draw wisdom and best practices from those who really make a living navigating and helping leaders flourish in all times of prosperity and in spaces of crisis and distress. 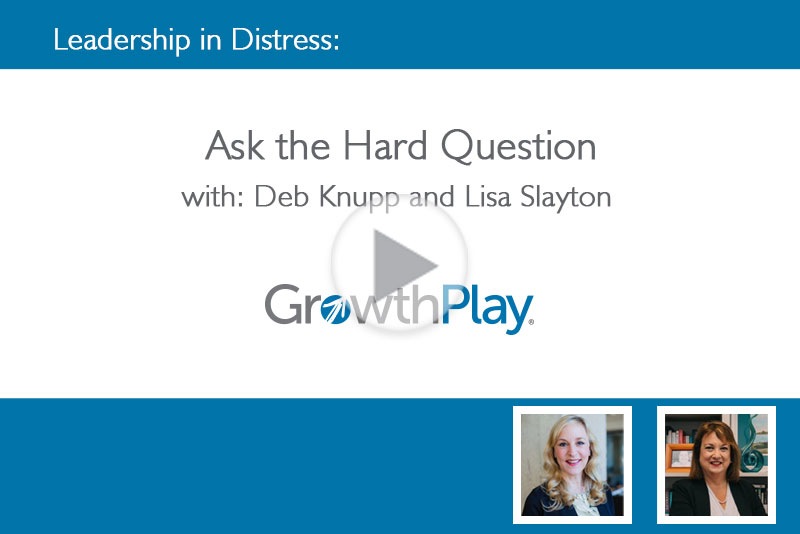 Deb Knupp: So on a practical level, I’m a leader, listening to this, and I want to take a meaningful next step and really understanding not only this model. I want to also understand what would I do on a practical level, not to keep defaulting to command and control, but actually make some space to do that. What are some points of guidance that I could take and tactically or consciously. Maybe it’s a better way to ask that.

Lisa Slayton: Well, I think there are a couple of possibilities. I was on a webinar last week with David Stone and his team that they’re putting into application immediately. And so I began to adopt them. One is to counsel leaders to ask their leadership team to begin to keep kind of a leadership journal and it’s not a long missive. It’s two or three stories or examples, a day of where they’ve seen something happen that is moving things forward. Doesn’t have to be a big deal. But if you collect those stories and then gather together to process them, you begin to see new patterns emerge. And that’s what we’re looking for. What are the new things that are emerging.

The other thought that I’ve been playing around with and beginning to make recommendations around is to intentionally put together small teams of people not big teams, but small teams three or four that are from various places in your organization. Maybe it’s a senior leader who’s been around for a long time knows the business really well. It could also be someone who is in a decision making role and then maybe it’s someone that’s newer to the organization who has a fresh perspective or someone that’s young just out of college who’s just joined your organization. Create space, say, take a half an hour every day for the next week and think about what’s possible for us to do. And create a space so all those voices can be heard. And then you begin to collect those ideas and what comes out of that that time. And you’ll again begin to see new patterns and possibilities emerge. But leaders have to be intentional about it and they can’t be fearful that it’s my more unproductive time. In fact, it may become the most productive time.

So it takes a leader with a fair degree of confidence to say we’re going to create some space for this so that we can begin to see what we should be paying attention to. I also think this is this is probably the most important thing for leaders to have in in their lives right now is really ask yourself a hard question and the hard question is this – Do, do I have people around me who are telling me the truth?

You know, I’m watching all kinds of visibility into different windows and I’ve seen leaders who have, you know, either an advisor or another senior member of their team who has called them out. Right. And they listen and adjust and move then we’ve seen it happen. We’ve seen it on the national stage where the truth is called out and it gets defended or diminished or discounted. That’s not going to fly in this environment. This is not a moment for defensiveness.

This is not a moment for trying to be the one in charge, all the time. This is the place where leaders have to be willing to say we don’t know – there’s uncertainty, there’s volatility, and so everyone should have the ability to say what they see. They should speak truth. We don’t always have to agree about it, but we have to create space for people to bring their varying perspectives in. That’s the place of learning right and it’s scary space, but it’s where we have to go and I can’t even imagine what it would be like to be working for a leader right now who is in some sort of delusional environment where they think this is all going to get fixed overnight or they’re not believing, or they’re behaving in a way that just is totally offensive.

I learned of one leader that, you know, in March, as all this was unfolding. His CEO said to him, “I know you’re supposed to leave here on vacation for two weeks, maybe this isn’t the time to go.” And he went anyway. Then posted pictures of his you know drinks and dinners and all this. And I thought, that is a tone deafness in this moment as you’re leaving your team of people behind that are prepared, and you’re gone. Right. And this isn’t some sort of made-up scenario that you’re somehow going to have the magical ability to weather – that’s delusional.

Deb Knupp: It’s dangerous. Yeah, well, I love this idea around the complexities. And so again, from a practical takeaway. It’s almost like it sounds like to me, almost like a new cut on like a modern-day innovation tournament where you can ask your leadership team to just be data collectors of the stories and examples of greatness. And again, I think there’s something powerful about that, even for future marketing and sales potential in terms of how do we quantify the value we bring to our customers.

I’m not alone, the people that we’re going to recruit, think there’s value there. I love this idea of creating these small teams with diverse experiences or backgrounds and, to that end, to see the ideation and brainstorming by positing a very concrete, specific question and then inviting these teams to simply dialogue and discuss that. I bet it would be a wealth of insights that could lead to new offerings new products, new practices, new policies. And it would be the collective that would be generating that as opposed to a small group of leaders trying to solve for all of this. And then I think the last thing is you’ve described, it’s sort of this understanding of you can’t hear that the most evolved leaders will have truth tellers surrounding them and to really hold space. To do that, check in that sort of that check or accountability check with some truth. And so I think those are really three very practical things people can do to really step into the space.