The GrowthPlay leadership team examined the sign of the times, and asked, what is it that we want to offer our community to elevate hope? That will create clarity and will drive some measure of control and confidence so that people can act courageously in this distress and post stress? With our Leadership in Distress Series, we hope we can draw wisdom and best practices from those who really make a living navigating and helping leaders flourish in all times of prosperity and in spaces of crisis and distress. 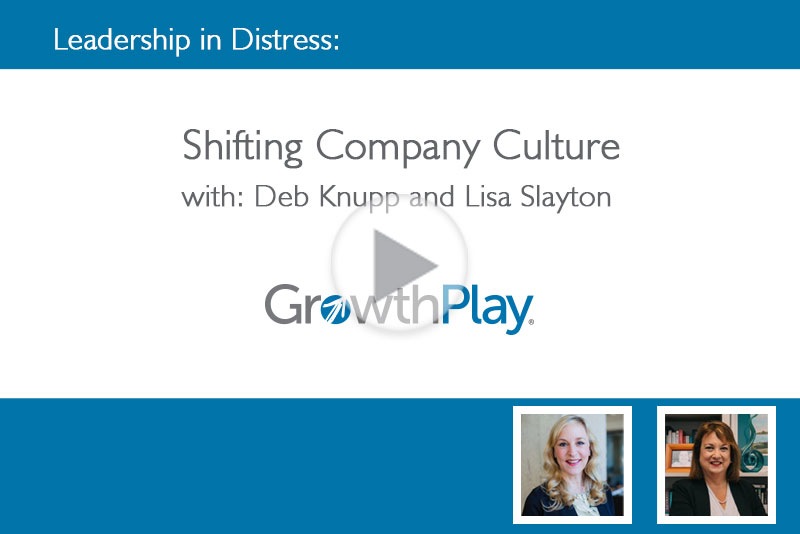 I think you have often shared with me that you know culture eats strategy for breakfast or lunch or some meal of some sort – that the idea of culture is so foundational before you get into strategy and tactics and actions. And, you know, as you think about what we are learning, and will continue to learn, in the coming weeks, and this new remote working world and in this space, an era of virtualization, as I’ve heard it called. How do you anticipate organizational culture is going to be both positively and potentially negatively impacted if we’re not planned full and mindful of who we are and what we want to be?

It’s interesting. I think I was on a call yesterday, a webinar put on here in Pittsburgh and we have a wonderful organization here called the Pittsburgh Technology Council, which serves members who are, you know, entrepreneurs and tech innovators and they’ve been doing a daily briefing. And yesterday, there was the leader of a large advanced manufacturing company and he made an interesting comment. He’s probably, I don’t know, late 40s early 50s and took over a family business about 15 years ago.

And he said, “I don’t think I’ve spent this much time at my desk in 25 years of being in business.” They have their – they’re a global company and the international travel is extensive and he said, “you know, it’s interesting. On the one hand, I miss the being able to go out and have the high touch with my people in our various plants in factories around the world. On the other hand, I, I see more that I’m “stiller,” I’m calmer and I have more ability to scan the landscape and see what’s going on.”

Now, they’re considered an essential business they make safety devices. And so, they’ve restructured how their factories work, but they’re in business, right, so he’s not sitting at home. He’s functioning in his office environment and his people are there and they’re practicing all the safety practices.

He said, “but the opportunity to really sit with people in more space has been a real advantage. I also think that, you know, we’re seeing that it can produce certain kinds of efficiencies right, I’m productivity.”

When you get on a zoom call like this one, you’re not going to spend 15 minutes getting coffee and chatting about your weekend, right, you get on and there’s an agenda and you get down to business and the calls, the time, can be used more efficiently, as we would say and I think that’s true. I think the shadow of it is that we’re going to perhaps overextend this and replace some things that should go back to real human interaction. Rather than the virtual environment sitting across a table in a coffee shop has a different level of encounter than even this environment as beautiful as your faces on the screen. I’d rather sit in the room with you.

Deb Knupp: Right me too

And so that’s that is a reality. And I think one of my fears for this, one of my hopes, is that as a sort of type A country will call this, you know, hyper individualism and hyper productive, productivity oriented us. We are in the United States. I hope that there’re also people creating space to have a little downtime in the midst of this and some people, some businesses, are continuing to go full bore in this environment. Other people are grounded, right, they’re out of work and they do have more time and space. And what are the implications of that – my fear for business leaders, is that they’ll view this as an opportunity to accelerate productivity, because they think they can get more in and what I’ve learned about myself, and I don’t know if this is true for you as, you know, I spend most of my days like this in various groups on the on the phone or doing zoom. A lot of zoom calls and I’m actually finding that I have a little zoom fatigue. Right?

And what I’ve learned is that I need space between the calls and I need to get up and walk around and create some mental space so that I can make the shift. You know, part of that chitchat time of coming in and out of meetings, of transitioning from one physical space to another, gives our brains an opportunity to reset a little bit before we go back into the next environment. When we scheduled calls like this back-to-back. We have no opportunity to reset. We’re going to actually become counterproductive at some point in the day. And so, I think we need to really, really pay attention to the long-term implications of that, some of which we don’t really know yet. And I do think, even in the short term.

You know we did. We spent time in the summer up in Maine on the coast. My husband’s family’s been going there for years and on Sunday night we scheduled one of the community habits up there, something called a porch party where you invite people to come sit on your porch. Everyone has a screened-in porch and drink and have a snack. And those are delightful ways to connect with people. So we did a virtual porch party on Sunday night, and it was hilarious. And that was a positive use right of connection with people that we actually wouldn’t typically see at this time of year. We’re all there in the summer, but not now, and it was fun to connect and to think about the summer and hope and pray that we can all be together up there.

That was a positive, right, so it is creating opportunities to connect my 93-year-old mother-in-law with all four of her sons, my husband included. We got on the phone, on a zoom call, with her sons last week and the delight on her face to see them all on her iPad which she’s remarkably adept at using it 93 was just wonderful. Right. So there’re some pluses and minuses. And I think we’re going to have to go through an evaluation period, once we do have the ability to go back into the real interaction environment, to assess how we leverage this learning and how what we let go of that wasn’t particularly useful.

So what I’m taking away from what you’re saying is, just because we are now learning that virtualization can make some things easier and more efficient, it shouldn’t be confused with effective. Yeah, and that we need to be mindful so that the things that we are the leading and learning and can be huge positives and can really lift potential. But let’s not substitute efficiency and effectiveness or efficiency for effectiveness.

The second thing that I’m hearing you say is that recognition that “work from home” isn’t “work and home” or the same thing because flying the same kind of sort of relationship and personal time and downtime and replenishment time, much like you would see an elite athlete. You know, and you taper and before a big swimming race, you really, you know, take some downtime before you engage in a high velocity situation.

It’s going to require real acts of leadership to make sure that we don’t allow “work from home” to be “working home” all in the same way, because I can see some of the consequences and frankly for me as a person who, you know, with you’re not accustomed to working from home, you recognize like every minute of your day could be productive in the pursuit of something to advance or your business or your team or your organization. And so, that real boundary, keep making time for porch parties and that’s also another takeaway hopeful realism and the virtual porch party nuggets. I think will sustain us as well beyond this time.