Leadership in Distress: What Makes an Exceptional Leader

The GrowthPlay leadership team examined the sign of the times, and asked, what is it that we want to offer our community to elevate hope? That will create clarity and will drive some measure of control and confidence so that people can act courageously in this distress and post stress?  With our Leadership in Distress Series, we hope we can draw wisdom and best practices from those who really make a living navigating and helping leaders flourish in all times of prosperity and in spaces of crisis and distress. 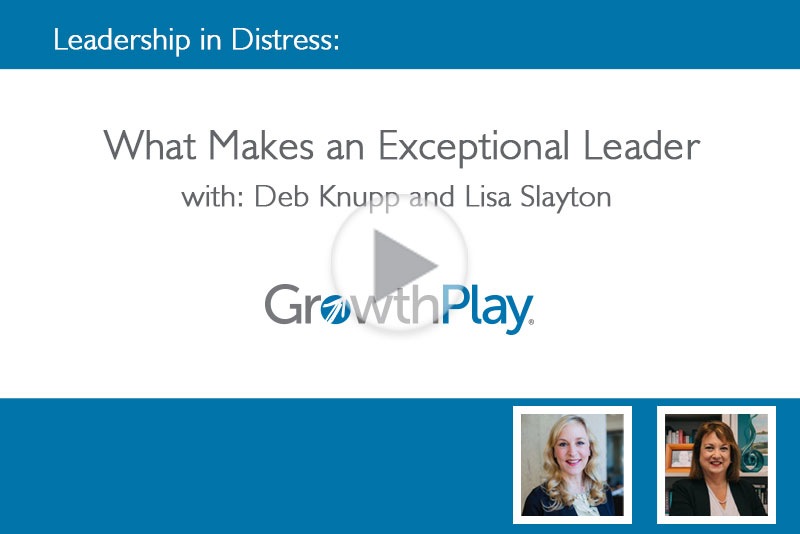 What Makes an Exceptional Leader

Having spent really, you know, more than 20 years and as a CEO as you outlined, you know that you’ve been doing the leadership development work as a strategic advisor and consultant how would you, what would you say if you were talking about some of the traits that really underscore leaders who are being successful in the environment, seeing this as opportunity. What would you say are the things that would be important? And, I’m saying really go beyond the obvious like a lot of times when we say what makes a great leader you hear people often say, well, their vision. You know how to engage teams. And certainly, those are important attributes that positional leaders often are tasked to do. I’d like you to go a level deeper and tell us what are the foundational core values and the leadership skills that are required, but may not be as obvious to anyone who who’s thinking about their role and as a leader.

Yeah, it’s a great question. I think, there’s a lot that I’ve seen floating around that sounds like to right set a clear vision, you know, keep your people engaged, you know, all of that. It’s sort of the muscle up heroic version of leadership.

There’s also been a lot that’s been borrowed from the technology space around, you know, be agile, be nimble. Somehow, people are supposed to conjure up innovation, you know, out of their hats. I don’t know where it’s coming from.

But innovation doesn’t actually work that way. And we’re going to talk about that in just a minute. Um, I think the thing I’d say about exceptional leaders in this moment is that they are going to be demonstrating both courage and vulnerability, both strength and empathy.

Both moving forward and creating space for people to evaluate and assess where they actually are and deal with that. In other words, I think exceptional leaders will remain calm. Non anxious is the phrase that that we use in our, in our practice.

In the tensions of the current environment -and there are many tensions – leaders and a lot of leadership skills and competencies are developed around problem solving. And so leaders are really paying attention to what’s the problem and how can I fix it. Right? Well, in this environment, the problem is unidentifiable, or, we can’t get our hands around it and we certainly can’t solve it. It’s beyond the scope of any one leader to do that. So to pretend that we stay in that problem solving mode and hunker down is actually going to be counterproductive over time. Those are the leaders who will flame out, the organizations will not make it, or they will start they’ll sputter along through this, but I don’t see those as the organizations that are going to come out on the other side. And, in a whole and healthy place, those leaders are the ones that are going to get in their own way pretty quickly.

You know it’s curious and, having experienced this idea of having courage strength and also a sense of empathy or vulnerability. Sometimes those sound like diametrically opposing points of view. And yet, when you look at how those two things work in concert, it often creates this space where people follow you because they want to know, because there’s an attraction to that. Can you speak to that, just in a practical sense when you look at what are examples of strength or sort of more of them authority are courageous aspect of things. At the same time in this space of the unknown, what is the vulnerability or what does empathy look like as we are in our unprecedented waters.

Well, I’ll you know borrow or directly quote from a very popular social scientists in my space and actually she’s become popular nationally. Many people know Brene Brown, and she actually did an interview on 60 Minutes this this past week. If you haven’t seen it, it’s worth finding. Very timely considering the world that we’re living in.

What Brene would say to this, and I think this is true. Her research bears it out. This is not just her opinion or something she thinks about and I would certainly say in my work. It has proven true as well is that there is no act of courage that’s not preceded by vulnerability. Right? And so, we cannot actually really embody true courage without first being willing to go to that space of uncertainty and unknowing, and if you look, she has case studies in her books and you know I won’t take the time to do that here.

But true courage requires you know her favorite quote and one of mine is from Teddy Roosevelt. It says it’s for the people who are in the arena like we go into the arena. We don’t know what the battle is going to hold but we go into the arena as prepared as we can. And yet there’s real fear there, so courage is not the absence of fear. Courage is acting in the face of that fear in the face of that vulnerability.

And I think that’s going to be the characteristic that distinguishes effective leaders and they’re going to be really grounded in reality. I’m watching as many of us are on the national stage and I’m paying attention for the leaders who are exhibiting those qualities right now.

And there are a few of them that are standing out right. I think of Dr. Anthony Fauci who has become sort of the voice of common reason. He doesn’t know everything that’s going to happen, but he shows up regularly, he gives you a sense of confidence and comfort, even in the unknown because he’s reality based. He’s dealing from this place of evidence and facts and data, and he’s taking us just to the next step of what he knows right. He’s not trying to project out, you know, six months from now, what’s going to happen because he’s a realist.

Hopeful realism is what I would call it and that’s what he gives us – a sense of hope, but also firmly grounded in reality.

I love it. So that is a quotable takeaway, and it will likely show up in some conversation that I have in the coming days – hopeful realism.